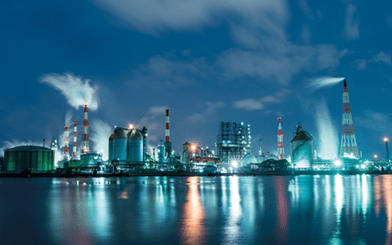 A large oil refinery in the UAE, in operation since the 1980’s has undergone several expansions over the years. Recently, a new residue fluid catalytic cracker (RFCC) was commissioned. It was part of a multi-billion dollar expansion project, doubling refinery output. Unfortunately, an incident occurred in the area of the RFCC, degrading various units.

IMI Remosa was asked by the refinery operator to support a troubleshooting analysis for a potential hazard source coming from the butterfly valves at the expander inlet.

Standard butterfly valve design allows for a certain amount of gas leakage. Due to the large dimensions (86″) of the valves, the leakage of the expander was magnified. This was despite the two butterfly valves being in a closed position. In this condition it was not possible to perform maintenance activities safely.​

IMI Remosa promptly responded to the customer’s needs with the development of a new product. This was possible due to the combination of know-how and experience from both IMI Orton and IMI Remosa.

IMI Remosa was able to offer a new 86″ triple eccentric butterfly valve with significantly reduced leakage for proper isolation of the turbo expander.

IMI Remosa had to study and select the right materials and the right valve design for a butterfly valve to cope with such extremely high temperatures (around 700°) and operating pressures of more than 2 bar.

As an additional challenge IMI Remosa was asked to deliver the prototype valve in less than six months.

Thanks to the combined efforts of the IMI Remosa team in collaboration with IMI Orton, project delivery was achieved well within the six months specified. Only three and a half months were needed from start to finish.​