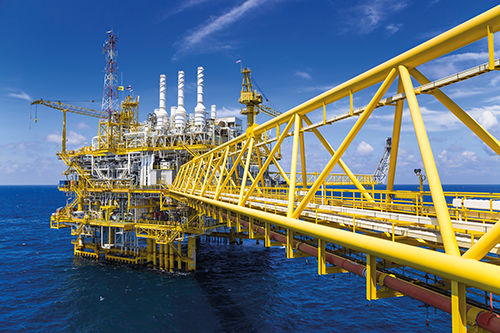 A multinational Oil & Gas producer in the UK North Sea was facing significant production losses of up to £2m* annually due to the poor performance of a competitor level control valve, which was installed downstream of the glycol dehydration contactor.

The application was challenging due to the combination of high pressure drop, very low flow, solid particles, and sludges in the fluid. Due to gravity, solid particles were collecting at the bottom of the contactor and were unable to pass through the level control valve. Slugs were also occurring during a trip of the gas compression system. This meant the valve, with a conventional drilled cage trim, was seeing clogging and sticking from two separate issues.

The valve was clogging so often that it had to be taken out of service and physically cleaned as often as once per week. This meant that the customer experienced multiple unplanned partial shutdowns and production losses of up to 50%. The plant needed to reduce downtime and find an efficient, reliable valve solution, which at the time was not available on the market.

The solution met the customer’s needs by preventing solid particles and slugs from clogging the valve. Unlike the competitor valve, it is able to handle the high pressure drop as well as small flow rates. After a consultation with the IMI team, the customer strongly believed in our new technology, even though there was no installed base or proven field reference at the time of quotation.

Since installation of the EroSolve MMT valve at the end of August 2021 there have been no issues reported. The client was pleased that the time to install the new valve was less than that needed to maintain and clean the previous valve. After over 6 months of service, the MMT valve has not had to have any maintenance performed and is operating within the required parameters. The operators on site are extremely impressed.

By replacing the control valve with an effective technology, the gas dehydration system is now working without any unplanned downtime and is no longer a bottleneck in production.

To date the customer has saved £1million thanks to EroSolve Metamorphic Trim.

Could EroSolve MMT solve your problems?

Get in touch with IMI Critical Engineering today to find out more.