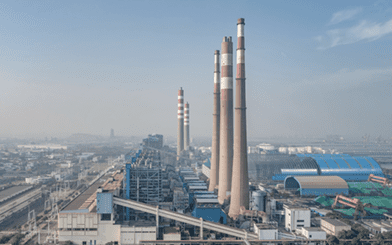 IMI CCI received information that a coal-based thermal power plant was having issues with their competitor supplied superheater spray control valves and that these issues were severely impacting the plant’s performance. The valves were experiencing frequent valve seat erosion along with leakage which caused poor low flow controllability and poor temperature control of the steam entering the turbine. A welded seat design added to the difficulty by complicating the seat repair process.
The plant had been experiencing these issues since its commissioning in 2015. The plant operators reached out to IMI CCI for a solution based on the excellent performance of IMI CCI’s previously installed DRE, NBSE and DRAG® valves for the turbine bypass systems.

The IMI CCI team worked closely with the customer to identify the root cause of the various problems surrounding the superheater valves. The IMI CCI team, supported by their Valve Doctors®, determined that part of the problem was the current valves needed to be operated beyond their original specified parameters. Based on the newly determined requirements for high rangeability and precise control at low flows, IMI CCI offered the 100DLC DRAG® valve with a piston actuator.

The 100DLC valves offer several key features including: minimum controllable flow down to 2000 kg/hr to meet the actual operating conditions; a clamped type seat versus welded seat to simplify the maintenance process; and a pneumatic piston actuator to provide tight shutoff.

The high rangeability provided by the 100DLC is possible due to DRAG® technology, which limits the velocity of the fluid as it enters the seating area and minimises the erosive forces that would otherwise compromise the valve’s ability to provide low flow control as well as tight shut off. By utilising custom characterised disk stacks, DRAG® technology can provide high rangeability while maximising precise control for all process conditions.

The customer was excited to install the new valves which eliminated the long-standing problems resulting from the poor performance of the competitor valves.​